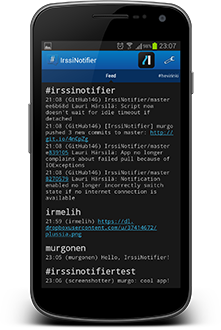 Get notifications from IRC hilights and private messages straight to your Android™ device! Project is open source, see GitHub project page for details. Check Google Play™ for screenshots. There are also unofficial support for WeeChat and Python.

IrssiNotifier uses Irssi script to send IRC messages to server, and Google's Cloud to Device Messaging framework to send notifications to Android device. This minimizes the battery usage of your device, and enables notifications to be sent near real time.

First download IrssiNotifier Android app from Google Play. After that, follow instructions about setting up the Irssi script in the help page.

What do I need?

You'll need Irssi running on Linux server or similar (with wget installed). You'll also need an Android device (phone or tablet, or both) with Android version 2.2 (froyo) or later.

This service was made by Lauri Härsilä, murgo @ IRCnet. If you have any questions, drop me a line by email or join #irssinotifier at IRCnet. Huge thanks to everybody who have donated money or contributed source! Thanks to Heidi Friman for icons.

How can I help?

IrssiNotifier was created entirely on my free time. If you have found IrssiNotifier useful and want to help keep project alive, please consider buying the IrssiNotifier+ and/or donating through PayPal or Flattr.

New version of the app has been released, that fixes only single message showing up in the app. Thanks to everybody for reporting, and special thanks to jheidel for debugging the issue.

Also new version (24) of Irssi script has been released with the following features:

New version of OpenSSL is now supported. If you're having encryption troubles, try updating the script.

Messages should now wake up Android 6.0 correctly. Thanks, scolphoy, for the pull request.

The previously broken script is now (hopefully) fixed. If you installed script version 19 in the last couple of days, you might need to restart your Irssi or run following commands in Irssi after updating the script:
/script exec $SIG{CHLD} = 'IGNORE';
/script exec wait;
Run the last line each for every zombie process you might have. Check earlier news post for more details. Please contact me if you are having issues.

There's some issues with the latest release of the IrssiNotifier Irssi script, so it's been reverted until we get it fixed. Techinal jargon: broken script spawned a defunct zombie process for each highlight. If you have lots of Irssi zombie processes (ps x), run "/script exec wait;" in the Irssi. You have to run this one for each zombie process.

Welp, it's been almost a year! Here's new script, thanks to people who fixed my stuff! Fixes and features:

New script option: irssinotifier_clear_notifications_when_viewed. When this command is turned on, notifications on the phone are cleared automatically when you change away from the last window that had hilights.

Pretty handy! Thanks to qvr for implementing this!

App should no longer forget old messages when receiving new ones. Sorry about that, thanks for everybody who reported the bug.

New version contains following improvements: Also, IrssiNotifier+ has been released. In addition to the above fixes, IrssiNotifier+ has the ability to pull the messages from the server on app startup, so you'll receive messages even if they don't get pushed through! This is useful when you are not online all the time, or if you have notifications disabled. You can support development of IrssiNotifier by buying it from Google Play. Thank you for your support.

Irssi script now disregards idle timeout if you are not attached to your Screen, so you'll get notifications straight away after detaching. Also, the script should no longer send garbled notifications when using Twirssi or other 3rd party addon. Check the updated upgrade instructions.

New server software is up! Lots of changes and bugfixes under the hood (improved perfomance, improved error handling etc.). Also, now you can remove devices from the profile page in addition to disabling them.

As usual, if you run into some glitches or other oddities, please inform me through IRC or mail.

I slightly botched up the version 14 release, so version 15 contains some hotfixes.

No, this is not an April Fools joke, I am actually releasing something. Lots of fixes and new features for the script, thanks to many people who have sent pull requests to me! Just follow the two simple steps on top of help page to update.

Now, to prevent this from happening in the future, newest Irssi script now times out before freezing up. Updating is very much recommended.

I accidentally deployed a broken work-in-progress version of the Irssi script yesterday, so if you installed or updated the script recently and are having problems, please update the script to the latest official version using these instructions.

This is a major release. Older versions of Android app won't work any more, since server side has been changed a lot.

Fixed bug where Irssi script sometimes caused other scripts like mail.pl to crash.

(To upgrade script, just follow steps 1 and 2). Script depends on wget and openssl.

You can clear any of these settings by using the following command:

Do not notify while using Irssi

When set to more than 0, you will not be notified from events that occur between going idle (i.e. not pressing any keys) and the set second count after that.

Only receive notifications while away

/set irssinotifier_away_only [ON or OFF]

When set to ON, notifications will only be sent if you are away. Useful in combination with screen_away script.

Don't receive notifications if attached to screen or tmux

/set irssinotifier_screen_detached_only [ON or OFF]

If on, you don't get notifications when you are attached to the screen or tmux in which Irssi is running.

/set irssinotifier_ignore_active_window [ON or OFF]

When set to ON, notifications will NOT be sent from the Irssi window currently open. Be aware that if you forget window open while detaching your screen, you will not get notifications from that channel.

When one or more channels are set, you will not be notified about hilights from those channels. You can also block query windows (private messages) with this command. Use space as a separator (e.g. /set irssinotifier_ignored_channels #channel query).

When one or more servers are set, you will not be notified about hilights from those servers. Useful for blocking bitlbee etc. Use space as a separator (e.g. /set irssinotifier_ignored_servers IRCnet quakenet).

When one or more nicks are set, you will not be notified about hilights from those nicks (users). Use space as a separator (e.g. /set irssinotifier_ignored_nicks mom murgo).

Notifications about messages that contain the given regex-pattern are not sent. Uses perl regex. Use space as a separator (e.g. /set irssinotifier_ignored_highlight_patterns slap [lL][oO]+[lL]).

Notifications about messages that doesn't contain the given regex-pattern are not sent. Only applies to public messages. Disabled if empty. Uses perl regex. Use space as a separator (e.g. /set irssinotifier_required_public_highlight_patterns slap [lL][oO]+[lL]).

Use proxy for HTTPS

The given proxy is used for the notification sending. Pretty self-explanatory.

/set irssinotifier_enable_dcc [ON or OFF]

If set to OFF, notifications from DCC chats are not sent.

Automatically clear notifications from phone when they are read

/set irssinotifier_clear_notifications_when_viewed [ON or OFF]

If set to ON, notifications on the phone are cleared automatically when you change away from the last window that had hilights.

I'm not getting any notifications!

Follow the installation instructions to the letter. Check the profile page to see if the installation works (or at least it has been working). Ensure the script is loaded in your Irssi. If you have restored the Android app from backup, clear its data. Notifications might also be blocked by firewall if you use wi-fi. If you need more support, please visit #irssinotifier @ IRCnet or contact me by mail at murgo@iki.fi.

Notifications work only every now and then!

Every device added to the system has certain limits for the amount of push notifications they can receive (about 20 per hour), which are reset gradually. Use above Irssi commands to reduce amount of wasteful messages sent to you. Furthermore, sometimes Android push notifications have unexpected delays, and some messages may even get lost.

I'm getting decryption errors on my Android device!

If you need more info, drop by #irssinotifier @ IRCnet or drop me a line at murgo@iki.fi.

Messages are stored in the server for seven days. Messages are encrypted by user's own encryption password (be sure to change yours).

User can wipe out his/her account from the profile page. This will remove all information regarding the user (including messages).

Anonymous statistics (analytics) will be gathered from users visiting this web site. Anonymous and statistical usage is also collected from Android app users (how many users, from which countries are they from etc.).